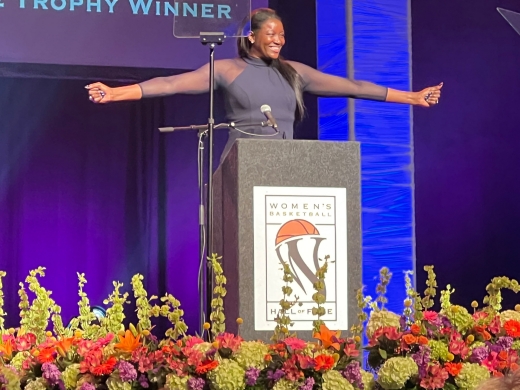 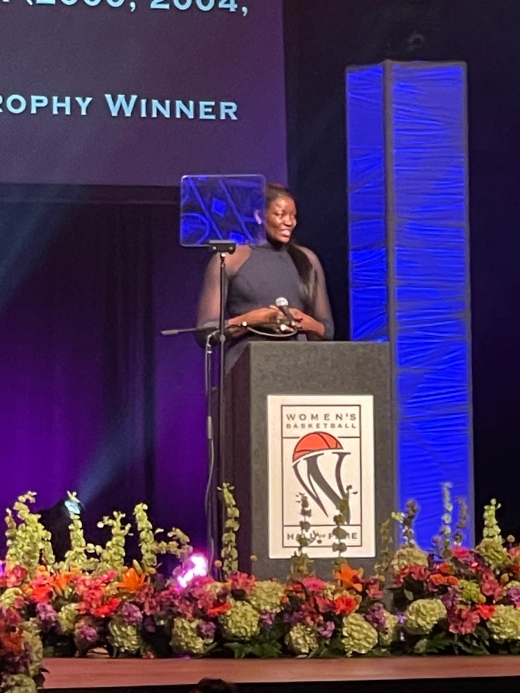 Milton-Jones finally gets her time to shine

At her induction into the National Women's Basketball Hall of Fame in June, DeLisha Milton-Jones praised "a fierce, strong-willed woman who stands in the middle of adversity and never flinches nor wavers."

"Mama, every test and every trial we have encountered have allowed (her sister) Charmaine and I to be your greatest testimonies, because without your perseverance and your willpower, we wouldn't be who we are today," Milton-Jones said as tears streamed down her mother's face.

What the Old Dominion University women's basketball coach didn't mention was the ultimate trial the family endured when she and her sister were little.

One night, after their parents got into a fight, their abusive father stormed out and began shooting a gun. The bullets pierced the walls and sailed only a few feet above the heads of the sisters. That night, their mother decided it was time for her and her daughters to run away.

Milton-Jones spoke before more than 1,000 people at the century-old Tennessee Theatre in Nashville. It was one of the proudest moments of her 47 years, which have been marked by adversity and heartache.

Even the start of her basketball career came with a struggle.

She was the biggest, most talented player on her middle school team, but she played little. Another girl with less talent got more court time because her family had connections.

She was a Kodak All-American and SEC Player of the Year at the University of Florida. Milton-Jones later played for two seasons with the Portland Power of the American Basketball League before the ABL folded. She spent the next 17 years with the WNBA, playing most of that time for the Los Angeles Sparks.

She played for two WNBA championship teams, was selected three times to the WNBA All-Star team and was a two-time Olympic gold medalist.

After retiring, she rebuilt a moribund program at Pepperdine University in California from 2016 to 2018. She was an assistant the first season and head coach for the next two. In her final season, Pepperdine won 22 games and earned a bid to the WNIT.

Milton-Jones was assistant coach at Syracuse for a year before coming to ODU in 2020. Last season, she led the Monarchs to a 24-10 record. Their postseason play ended in the second round of the WNIT, when a comeback bid fell short and they lost 62-59 to Columbia.

Her difficult home life wasn't the only obstacle she had to overcome.

When DeLisha was 11, she was goofing around at a community pool. She fell, hit her head and flopped into the water. The pool was so crowded, at first no one noticed.

Doctors said she had a seizure while she was underwater, before the lifeguard dove in, pulled her out and immediately began CPR. Her mother never left her side at the hospital and nursed her back to health.

Before she was revived, DeLisha remembers seeing a bright light. She says a sense of calmness overtook her. She believes she died briefly, "but God believed I had more to do."

Yet even her successes on the court sometimes felt overshadowed. "She never felt fully appreciated in her basketball career," her sister said.

That changed in Knoxville.

Milton-Jones was flanked by a large, enthusiastic corps of relatives and Monarch supporters.

She was escorted by her husband, ODU assistant women's basketball coach Roland Jones, and Carol Callan, the director of the women's national teams for USA Basketball.

"DeLisha has a delightful smile," Callan said. "But her smile belies the aggressiveness she always showed on the court.

"She was a No. 4 player, and that position was always stocked with so many great players. Yet she rose to the top because of her competitiveness and her ability, but also because of her absolute work ethic. She would do anything she needed to do to be successful.

"And then she's just a great person," Callan said. "You have to be a great person as well as a great athlete to get into this Hall of Fame."

Milton-Jones teared up as she neared the end of her 9-minute speech, which was interrupted more than two dozen times by applause.

"Thank you for blessing me with the best husband ever," she said, addressing her in-laws.

And then to Roland: "You played your role selflessly by being the best supporting actor in college basketball."

She acknowledged the restorative power of the evening.

"You will never know how healing it is to stand on this stage and receive this honor," Milton-Jones said, before pausing about 30 seconds to wipe away tears. "Where many people have overlooked and underappreciated my talents, you came along and spoke of my career profoundly.

"Thank you for recognizing my contributions and singing my name.

"Every person and place in my life played a distinct role in who I am today. I thank God each of you was able to play it."