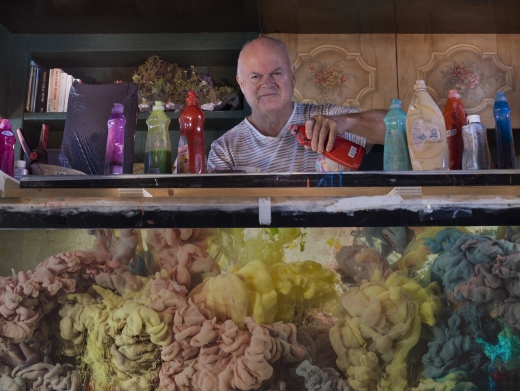 Keever’s golden formula: Go all in, move to NYC, keep at it

The career trajectory of Kim Keever '71 provides a model for making it in art.

How did he succeed?

Even before he fully committed to art, the engineering student followed his bliss by sitting in on art classes nearly every day. He especially liked Vincent Castagnacci, an associate professor who taught painting and drawing at Old Dominion University from 1966 to 1973.

Castagnacci, a retired University of Michigan professor, said in an interview in February that he was surprised to learn Keever had not been an art major. He recalled Keever's "simplified abstractions" and that he listened intently.

Castagnacci even visited Keever soon after he moved in 1980 to Manhattan's East Village, which brings us to another tip:

Move to New York — at least until you're established.

After his father died, Keever used part of his inheritance to buy a $1,500 apartment in a neighborhood beset with drug dealers and prostitutes. It also placed Keever in the midst of a burgeoning art scene that swept him in.

Within a few years, he was appearing in two group shows almost every week. That introduced his then-Picasso-inspired art to a big audience. He learned the importance of being in the center of the art world.

But in the late 1980s, when the East Village art scene crumbled, he had to find his way forward.

Tip No. 3: Be willing to struggle, possibly for decades.

And that doesn't count walking up and down six flights. Keever's building had no elevator. He calculated that in the 40 years he lived there, he put in 340 miles on those steps.

Keever found jobs to pay the bills, such as painting the walls of fancy Park Avenue homes while striving to find an art style that such residents might fancy.

When he hit on the fish-tank process — pouring pigment into water and photographing the ever-surprising results — he knew he had found an original approach he could endlessly explore.

The work quickly proved popular. Now he's literally moved up. He sold his sixth-floor walkup and bought a 12th-floor condo in a posh building in Miami with an elevator and a doorman.

"It was a long, insane struggle," he said. Perseverance had been key.

And one thing more: "I couldn't really do this life if I wasn't optimistic."