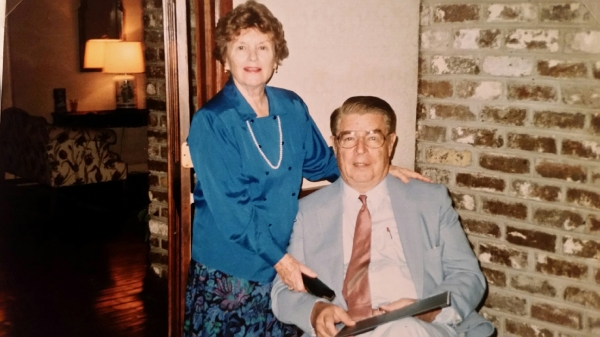 Kathy and Tom Scherberger, as well as their four siblings, were raised much in the fashion of many children in the Hampton Roads area. They were Army brats, and spent their time on the move.

They grew up mostly in the region, however, and over the years created a family bond with Old Dominion University.

Their father, Col. Richard J. Scherberger, attended school at ODU and played on its original football team in the 1930s, when the college was known as the Norfolk Division of the College of William and Mary. The football program was discontinued in 1941 when Richard Scherberger would head off to serve in World War II. Their mother, Virginia Barrett Scherberger, was charged with the daunting task of raising six children during Richard's combat assignments during WWII, the Korean Conflict, Cambodia and Vietnam.

Five members of Col. Scherberger's family were active duty officers at the same time during WWII: his father, three brothers and sister.

Tom says he, his mother, sister and oldest brother also did stints at ODU. He studied political science and worked on the Mace & Crown, the student newspaper of ODU since 1930. The newspaper would serve him well later in his journalism career.

"It was how I got some early writing experience," the former Tampa Bay Times editor said.

When his father died in April 2012, Tom mentioned to his mother the possibility of setting up a scholarship for students with military service-connected disabilities. His father inspired the idea because of his very active involvement in Disabled American Veterans, an organization whose mission is to empower veterans to lead high-quality lives with respect and dignity. Col. Scherberger worked hard to ensure those returning from war were able to get benefits, his son said.

When their mother died in 2017, Kathy Scherberger turned Tom's scholarship idea into a reality, creating the Scherberger-Barrett Memorial Scholarship for Disabled Veterans.

Established in December 2017, this annual scholarship - dedicated to the memory of Col. Richard J. and Virginia Barrett Scherberger - assists students who have service-connected disabilities. The scholarship also honors members of the extended Scherberger-Barrett families who, since WWI, have served in four armed services, and as first responders.

"Virginia Barrett Scherberger was included in the scholarship's naming because of her family's strong history in public service, primarily in the fire and police department," said Kathy Scherberger, who attended ODU for two years before transferring to East Tennessee State University. Kathy, a disabled veteran herself, and retired Air Force officer, earned a doctorate in psychology with the help of a U.S. Department of Veterans Affairs program.

Scholarship recipients must provide reasonable documentation from Veterans Affairs as proof of their service-connected disability status, have a minimum cumulative GPA of 2.5 and demonstrate financial need as determined by the Office of Student Financial Aid.

The scholarship's first recipient will be chosen this year and will receive $1,000 for the academic year.

"I'm really happy that my sister went ahead with this," Tom said. "It's nice to know that there are going to be veterans who will benefit from the scholarship. My parents would be happy to know that."