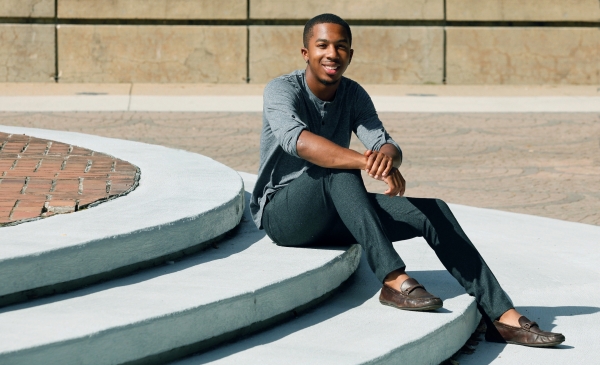 Maurice Brooks '17 had a whim about SHWIM shortly after he enrolled at Old Dominion University in 2013.

It took a few years between planning the business, taking classes and working a part-time job, but he opened the clothing line with partner Johnnie Jackson '16 in June 2016. SHWIM items can be purchased online or at THE Monarch Way, the new store showcasing ODU entrepreneurs.

The target buyers are young millennials, but the clothing is aimed to attract all segments. The products include men's and women's T-shirts, jackets and sweatshirts, many featuring the SHWIM logo. The goal, Brooks said, is to keep them affordable, with several items priced between $20 and $25.

SHWIM's top-selling winter items have been its men's and women's silver 3M jackets with Shwim logo and U.S. flag insignia.

The jacket goes for $125 or $100 for Old Dominion students or employees. "People are saying, 'I love this; I can go running at night,'" Brooks said.

SHWIM stands for Showing How We Integrate Minds, and its mission is to "foster an environment based on diversity and unite different cultures through fashion."

One example of its sensitivity to different beliefs: Consumers can customize the 3M jackets to place any flag they want on the front.

Brooks said he's been interested in clothes since he was in high school. He graduated last May with a public health degree. He had planned on becoming a doctor, but was drawn back to his initial passion.

Brooks said the Strome Entrepreneurial Center helped him and Jackson get tips from fellow student entrepreneurs and brush up on marketing strategy. Of course, no businessperson can avoid those freshman mistakes. Shwim's was to introduce its fall/winter line last year in June - way too early.

Now the goal is "to get better each and every season," Brooks said.

Nancy Grden, the executive director of the Strome Entrepreneurial Center, called Brooks "an exemplary entrepreneur with direct and intuitive customer insights" and "a leader among his team members and colleagues."

Perhaps her highest praise: She's a happy customer, having bought a SHWIM T-shirt after it opened. Her review echoes those of other customers: Doesn't shrink. Great quality.

This article will appear in the next issue of Monarch Extra, Old Dominion University's new e-magazine, which will be posted in March at www.odu.edu/monarchmag