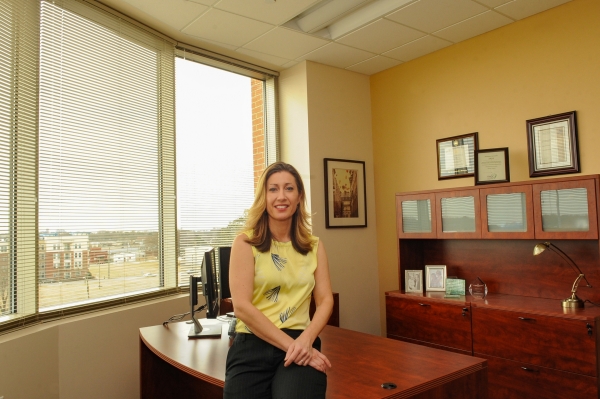 As executive director of Old Dominion's Center for Educational Partnerships, Joanna Garner leads a University effort to promote academic success within K-12 schools and higher education institutions throughout Hampton Roads and beyond.

At the center, known as TCEP, research and programming focuses on best practices for student and teacher success in a variety of learning environments. Current K-12 partnerships promote STEM education and military-connected student wellbeing in cities including Norfolk, Virginia Beach, Portsmouth, Hampton and Newport News.

The opportunity to lead TCEP is an exciting one, Garner said.

"Research and practice are a two-way street, and TCEP allows the community and University to learn from each other," Garner said. "We can investigate why something works in a context, which shapes our theories and courses of action for the benefit of everyone."

TCEP sponsors include the Virginia Department of Education, the Department of Defense Education Activity and the National Science Foundation. One of Garner's current K-12 partnership projects was recently recognized as a 2018 Program That Works by the Virginia Math Science Coalition.

Recently, Garner was a guest on the podcast Research in Action where she discussed her role as co-principal investigator for the Engineering Ambassadors Network, an undergraduate engineering student professional development organization with an outreach mission.

The network aligns with TCEP's mission and a recently awarded National Science Foundation EAGER grant that allows Garner and colleagues at Penn State to continue research into the effects of undergraduate engineering professional development on students' early career skills and experiences.

"Dr. Garner and TCEP are making a meaningful impact on how our children are educated and socialized," said Morris Foster, vice president for research. "That's more than just an academic accomplishment."

Garner joined TCEP in January 2011 after arriving from Penn State where she worked in various roles across the university system, including as an assistant professor of Psychology at Penn State Berks College, and as an instructor in the Department of Developmental Pediatrics and Learning at the Penn State College of Medicine.

Her primary field of scholarship is applied educational psychology, after receiving her Ph.D. in Educational Psychology from Penn State in 2003, and bachelor's and master's degrees in Psychology from the University of Surrey, United Kingdom.