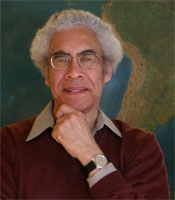 George Philander, the Knox Taylor Professor of Geosciences at Princeton University, will give the 27th endowed Ludwick Lecture at Old Dominion on Thursday, April 10.

His talk begins at 3 p.m. in Room 200 of the Oceanography and Physics Building.

Philander is a world-renowned scientist in the field of atmosphere and ocean dynamics. The topic of his lecture is "El- Niño's Family Tree." His two books for laypersons, "Is the Temperature Rising? The Uncertain Science of Global Warming" and "Our Affair With El Niño: How We Transformed an Enchanting Peruvian Current Into a Global Climate Hazard," reflect his keen interest in improving communication between scientists and laymen.

Philander earned a B.S. degree from the University of Cape Town, South Africa, in 1962. When apartheid laws were sanctioned in South Africa, his family moved to New York City. He went on to attend Harvard University and graduated in 1980 with a Ph.D. in applied mathematics.

Following graduation, Philander was awarded a postdoctoral fellowship at the Massachusetts Institute of Technology in the meteorology department. He then became a research associate in the Geophysical Fluid Dynamics Program at Princeton University, and was promoted in 1978 to senior research oceanographer of the program. Philander held the position for 11 years until he was appointed as a full professor of geosciences and director of the program in atmospheric and oceanic studies at Princeton in 1990.

He served as chair of the Department of Geosciences at Princeton from 1994 to 2001 and was named the Knox Taylor Professor in 2005.

Throughout his career, Philander has served as a consultant to the World Meteorological Organization in Geneva, Switzerland, and as a visiting professor at the Museum National d'Histoire Naturelle in Paris. His research on oceanic and meteorological changes has resulted in the publication of over one hundred academic papers, nine chapters in books and three books on such topics as El Niño, the Southern Oscillation and global warming.

The Ludwick Lecture Series started in 1988 to honor Jack Ludwick, who was the director of the Institute of Oceanography at ODU in 1968, and one of the founding fathers of what later became the Department of Ocean, Earth and Atmospheric Sciences.