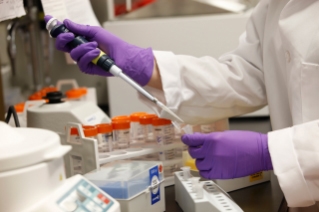 Which research topics hold the most promise for Old Dominion faculty members in the near future? One answer to that question comes annually with the announcement of awards from the Office of Research's Multidisciplinary Seed Funding (MSF) program.

Winners named this week for the 2014 research year include teams working on health issues involving breast cancer, autism, multiple sclerosis and the workings of the brain, as well as one team investigating the effects of climate change and sea level rise on the wetlands of Lynnhaven Bay in Virginia Beach.

The awards to the five research teams totaled almost $238,000. The teams include 18 ODU faculty members and eight collaborators from other institutions and institutes.

Lisa Kelch, research development and outreach coordinator for the Office of Research, said in announcing the awards that 25 teams submitted proposals, and that the winners were chosen by a group of senior faculty members. The MSF program, which was initiated in 2005, seeks to nurture promising research projects to the point that they can attract external funding.

The teams/projects selected for funding by the research office's panel of reviewers are (unless otherwise noted, the investigators are from ODU and are identified by the departments and/or centers they represent):

"Development of a Three-Dimensional Human Breast Model for the Advancement of the in vitro Study of Breast Cancer" - $50,000

Despite concerted research efforts and improved therapeutic strategies, breast cancer remains the second leading cause of cancer related deaths in women. While major questions surrounding the etiology of the disease remain, it is clear that local microenvironmental factors within the tissue play an important role. Unfortunately, a major roadblock in the study of microenvironmental factors in breast cancer is a lack of physiologically relevant human models of the breast. Our understanding of the disease has come mostly from animal models or simplistic culturing systems of human mammary epithelial cells. Future breakthroughs in treatment, prevention, and diagnosis of breast cancer depend on major advancements in experimental model systems. The challenge of generating an in-vitro system that accurately mimics the complexity of the in-vivo environment requires contributions from multiple scientific disciplines. This proposal takes such a collaborative effort to combine the latest advancements in tissue engineering and cell and cancer biology to develop a superior model system of the local mammary microenvironment. We will test the hypothesis that extra-cellular matrix proteins isolated from human breast tissue will better mimic the in-vivo environment as compared to non-tissue-specific scaffolding proteins. Long term, the model will be adapted for the co-culture of multiple cell types known to play a role in breast development and tumorigenesis. Future proposals will use the system to study how the local microenvironment suppresses tumorigenic cells, and how these cells overcome this suppression to produce breast cancer.

Autism Spectrum Disorder (ASD) has become a major public health concern, more common in males, with core deficits in language, repetitive behaviors/restricted interests, and social interaction. The social deficit creates significant anxiety among children, adolescents and young adults with ASD and their parents as they attempt to cope with the management of this disorder. A particular focus of research concerning social interaction in those with ASD has been on eye contact with other people. There have been multiple studies comparing the visual tracking of children with autism and controls related to how much time they spend on areas of the face for social recognition of emotion and social intent. The early work done in this field concluded that children with autism spent a considerable amount of time looking at the mouth versus the eyes of other people compared to normal controls. This finding was not reproduced reliably in adults and there was some variability with eye tracking during visualization of dynamic social scenes. Theories concerning the variability and conflicting findings have been explained by the myriad of adaptive skills that each child with autism possesses. However, these studies used only 2D images and commercial video that do not necessarily capture the dynamics of a natural social setting. In comparison, 3D images capture depth information and hence can be crucial for capturing natural dynamics and spontaneous response to different visual stimuli. The overall hypothesis of this study is that 3D facial expression analysis will provide more detailed and specific data about how individuals with ASD process human faces. More specifically, 3D facial expression caused by selected visual stimuli exposure to both ASD and control subjects may contain rich information content that may be crucial to distinguish between these two groups. Each pair of ASD and control patients will be exposed to randomized study conditions and computational facial expression recognition methods will be developed to identify differences between these groups. Our findings will be validated using Monte Carlo simulations to evaluate the effect of different 3D facial expression characteristic parameters for discerning ASD from control group.

input? What if this imagined music could be detected, synthesized, and played from a loudspeaker directly from measurements of your brain activity? Recent studies have shown that it is possible to accurately decode imagined language and other auditory phenomena using electrocorticographic (ECoG) recordings in humans (i.e. signals recorded directly from the surface of the brain). Thus, it is conceivable to decode musical information from ECoG activity, particularly because some of the fundamental components of music such as simple rhythms have a repetitive structure and are significantly less complex than language. Furthermore, the perception of rhythm is generally ubiquitous in humans across race and culture, which will likely lead to salient and robust neural representations. While many previous neuroscience studies have examined various aspects of music using the scalp electroencephalogram (EEG) or functional magnetic resonance imaging (fMRI), ECoG offers superior spatial and spectral resolution compared to EEG, and superior temporal resolution compared to fMRI.

Members of our research team have successfully decoded speech and auditory signals using ECoG activity, and demonstrated an ECoG-based brain-computer interface (BCI) for controlling a visual keyboard. We propose to extend our methods to decoding imagined and perceived music from ECoG signals. We will aurally present the subjects with carefully devised fundamental rhythm patterns and ask them to perform various imagery and manual reproduction (e.g., finger tapping) tasks related to the rhythms. We will analyze the brain signals to better understand how the brain encodes this rhythmic information. These preliminary results will lay the groundwork for future grant applications, where we aim build upon this knowledge of rhythms and extend it to decoding slightly more complex musical components such as simple melodies. Ultimately, we plan to use this information to decode imagined rhythms in real-time for input to a brain-actuated music synthesizer.

This notion of developing a "brain music synthesizer" would not only have a significant impact in the neuroscience and musical domains, but could eventually lead to the development of a creative outlet or alternative communication device for the severely disabled. Ultimately, this research could also allow musicians and non-musicians alike to effortlessly realize the "music in their heads." Furthermore, the results of this research will provide a framework for advancing BCI speech synthesizers for essential communication.

Climate change and accelerated sea level rise are jeopardizing the tidal wetlands. The climate change is bringing increased temperature, more frequent storms and increased rainfall, which will affect the freshwater input and sediment supply to the estuaries and bays where tidal wetlands reside on the long-term basis. The accelerated sea level rise poses a major threat to the wetlands, which will be subject to substantial losses unless they are able to trap sufficient sediments to keep pace. There is an urgent need to monitor and study these processes. The goal of the proposed study is to develop a multidisciplinary approach for assessing the impact of climate change and sea level rise on the tidal wetlands in the Lynnhaven Bay. The interdisciplinary platform will integrate advanced hydrological and hydrodynamic modeling and analysis with cutting-edge geospatial technologies. This approach can be easily applied to other wetlands where sea level is rising at an accelerated rate. The proposed study will focus on answering two science issues: (1) How will future climate change influence freshwater input and sediment supply to the Lynnhaven Bay? (2) How will future sea level rise change the tidal circulation as well as sediment deposition pattern in the Lynnhaven Bay? To achieve this goal, we propose three tasks: (1) conduct a hydrological modeling of the Lynnhaven watershed using the Storm Water Management Model (SWMM) and assess how future climate change affect freshwater input and sediment supply to the bay; (2) perform a hydrodynamic modeling of tidal circulation and sediment transport in the bay and investigate the effects of future sea level rise on the hydrodynamics and sediment deposition pattern; (3) analyze the modeling results and historical wetland data using geospatial technologies. The proposed study will greatly improve our understanding on wetland losses due to climate change and sea level rise. The proposed study will be part of ODU's Climate Change and Sea Level Rise Initiative (CCSLRI).

Older persons with multiple sclerosis (MS) are more likely to suffer a fall than a healthy older person of a similar age. Falls in people with MS are undertreated and often result in a sustained injury requiring expensive medical treatment. In addition, many people who fall develop a fear of falling which contributes to activity restriction and decreased fitness. Over 400 potential risk factors for falls have been identified; however, to date there are no validated tools for evaluating falls risk in persons with MS. The primary aim of the present study is to develop a better predictive tool for assessing falls risk for persons with MS. Specifically, we will assess whether the combination of validated, clinical measures of falls risk, dynamic assessments of posture and gait, and objective measures of daily physical activity provide a clearer picture of determining the risk of falling for older adults with MS. In addition we will investigate the interaction between these disease-specific falls-risk metrics and vascular function, a novel physiologic driver of gait impairment in MS. Understanding that falls tend to occur during or following physical activity, our secondary aim is to examine how performing an everyday, low-level activity like walking effects the falls-risk factors identified above. The data collected as a result of this multidisciplinary research effort will provide a unique and much needed new prospective into predicting and preventing falls in MS. Out ultimate aim is to submit multi-center grants to the NIH and MS Society to evaluate the effects of targeted exercise and balance training interventions on reducing falls and the prevalence cardiovascular disease in this population. Seed funding at this time will provide the investigative team the opportunity to establish ODU as a site for MS research in Hampton Roads.