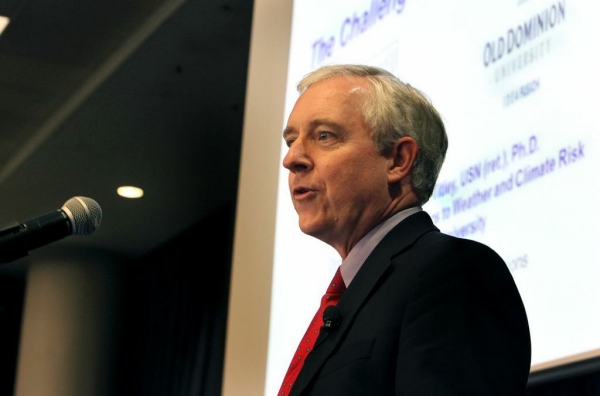 Titley speaks to a packed room in the Big Blue Room of the Ted Constant Convocation Center. Following his lecture, he answered questions from the audience. 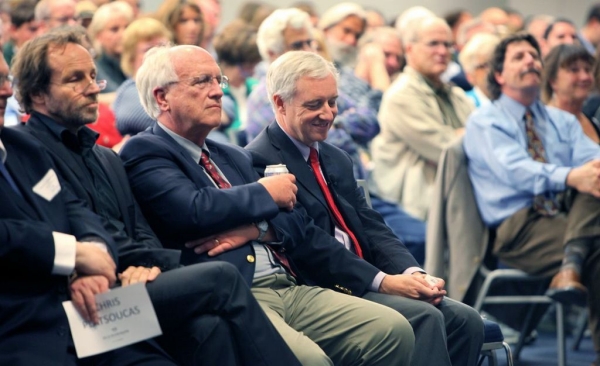 From left: Hans-Peter Plag and Larry Atkinson, co-directors of ODU's Climate Change and Sea Level Rise Initiative, sit next to Titley during his introduction. Photos by David Hollingsworth

Titley last spoke at ODU in 2010 while he was the Navy's top oceanographer and commander of the service's climate change task force. He now serves as director of the Center for Solutions to Weather and Climate Risk at Pennsylvania State University.

Titley's lecture was held in conjunction with the ODU "Access EU" international conference, which brought together about 70 European and American experts this week to discuss transatlantic solutions to sea level rise adaptation.

He told the crowd at the Ted Constant Convocation Center that climate change and sea level rise is a growing problem. "It's not about polar bears," he said. "It's about us."

Titley, who admitted that he was not always a believer, noted that the Earth's climate has always been changing. "So, what's the big deal?" he asked.

He prefaced his answer by saying, while temperatures have always oscillated, the world's civilizations were built up during a prolonged period of climate stability.

His lecture also addressed those who deny human activities have a cause and effect relationship with climate change, or don't believe there is even a problem at all.

"While there are certainly things to learn in climate science, don't be fooled by all the caveating: 'It's not settled,'" Titley said. "It's just physics - cutting-edge, 19th-century physics. We've known for over a century. That allows us, within reason, to understand this."

As far as what communities need to do to counter the threat of climate change and sea level rise, Titley said he is in favor of employing what he called "The Goldilocks Strategy."

"Not too much, not too little. Just enough at the right time. Spend what we need to, but not more," he said. "Learn. Don't foreclose our options."