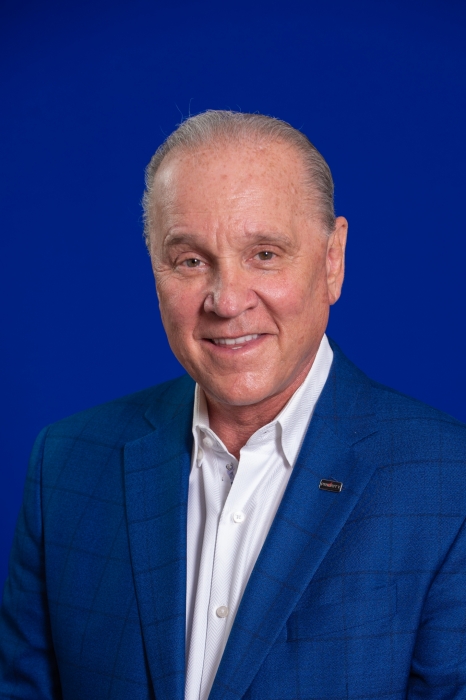 Dennis Ellmer '11 HA, was appointed to the Board of Visitors July 1, 2022 by Governor Glenn Youngkin. He currently serves on the Board's Athletics, Student Enhancement & Engagement, University Advancement Committees.

As a young boy in Norfolk Virginia's Oceanview neighborhood, Dennis Ellmer learned business basics and how to work with people. Like many enterprising youth of that era he started with a paper route, delivering the Virginian-Pilot in the morning before school and the Ledger-Star in the evening after school. He also worked in a deli and spent weekends shining shoes. As the son of a member of the military he learned self discipline and respect.

From those humble beginnings Ellmer began his career by selling motorcycles at Cycle World in Virginia Beach, and soon after moved to Colonial Chevrolet selling cars for the late Josh Darden, one of Virginia's premier businessmen and philanthropists. He credits Darden with providing his first opportunity in the car business and setting an example that emphasized the importance of integrity, service, community participation and personal commitment.

After several years with Colonial Chevrolet Ellmer assumed responsibilities of Sales Manager for what was then Kline Chevrolet in Chesapeake. Later he relocated to the Washington, DC area with the Kline organization, where he managed Kline Tysons Toyota, one of the largest Toyota dealerships in America. He was named President of the Kline business which operated several dealerships in the metropolitan Washington, DC market and Hampton Roads.

In 1999 Ellmer was presented with an opportunity to return to his roots by acquiring Kline Chevrolet and Kline Toyota in the Greenbrier area of Chesapeake, Virginia. He rebranded the dealerships as Priority Chevrolet and Priority Toyota, where he emphasized unparalleled customer service, his we put you first philosophy. That philosophy led to Priorities For Life, the value-added feature that upended the retail automotive business and catapulted Priority to the leadership position that continues today.

Following closely on the success of those first two dealerships, Ellmer began seeking other opportunities. Soon the Priority brand rose in front of Acura, Honda, Hyundai, and Infiniti dealerships in Chesapeake, where he also built one of the largest Toyota dealerships in America.

Priority continued to expand across the state of Virginia adding dealerships in Virginia Beach, Hampton, Newport News, Roanoke and the DC metropolitan area with new brands including Nissan, Mazda, Infiniti, Ford and Lexus. Today, Priority employs more than 2000 people and is ranked among the top dealer groups in the U.S.

Ellmer and his Priority team have achieved local, regional and national recognition for their business performance and community contributions. In 2019 Toyota President Akio Toyoda presented him with the Best in Town award, an honor bestowed on only one Toyota dealership out of the more than 2500 nationwide, for his groundbreaking Priority Inmate Training Program, which gives convicted non-felons a second chance in life with a good job and benefits. He was named the 2016 Time Magazine Dealer of the Year for Virginia and First Citizen of Norfolk in 2019. The Mid-Eastern Athletic Conference named him Corporate Partner of the Year. He has also received the Martin Luther King Leadership Award, the Norfolk Sports Club President's Award, the Steve Guback Distinguished Virginian Award, Northwood University's Dealer Education Award, Toyota Financial Ambassador Award, and the Chesapeake Sports Club Sportsman of the Year award in 2013.

Ellmer has also been recognized multiple times for personal and business achievements including the Hampton Roads Business Hall of Fame; Inside Business Power List in multiple years; many years named to Top 100 Dealership Groups in the U.S. where Priority ranks #42. He serves as President of the Virginia Automobile Dealers Association and sits on the ODU Board of Visitors.

Just as he never forgot his early business lessons, Ellmer also remembered the lessons he learned about the importance of community. From the earliest days of Priority, he encouraged his employees to give back to the community as he set the example himself. He is credited with rescuing the 50 year old Charity Bowl Football Game, raising more than $3 million in the past 5 years for children's charities. Under his Priority Automotive Charities he also helped fund the Priority Toyota Cancer Center, part of the Chesapeake Regional Health System. Priority is also responsible for the popular Home For The Holidays partnership with local SPCA and animal shelter organizations which has found homes of thousands of abandoned pets. Priority is a primary sponsor of the Old Dominion University Athletic Foundation. He is active in numerous professional and civic organizations on local, state and national levels.

Ellmer is very much a son of the Hampton Roads region of Virginia. He attended Holy Trinity School and graduated from Norview High School. He has been married to Jan Ellmer for more than 40 years and they have 3 children and 2 grandchildren. The Ellmers live in Virginia Beach.